Atlas is looking great this morning. He is up and about this morning showing a bit of clever cattitude. While his litterboxes are still in the kennel he has run of one bedroom. This morning as I opened the door he scooted out! Atlas promptly greeted Gary with a bonk on the head and MudCat deftly dodged the ornary orange cat.


He made his way to the kitchen and his normal testing spot for breakfast. He noshed out on half his allotment, came over and sat down in his usual spot...and burped. LOL!!! He is now curled on the settee and enjoying his temp. freedom. I will give the big guy credit this morning. He typically eats, goes potty, then finishes his first course. This morning was no different, other than he walked all the way back to the kennel to use the box in the kennel and not the box in the catio. I will still have to run a wet bleach mop over the floors, but it made me smile.


He hasn't had the appetite stimulant since the evening of 4/19 and the last Cerenia dose was yesterday. I still have to give him his Tamiflu, although the shelf life for that is only 10 days (last day) and his Zenequin antibiotic. I do notice his ear bleeds rather easily and wonder if this is an effect from the damage to the bone marrow. I did some reading about it and it could very well be. Something about the bone marrow over producing immature blood components as this point and it being a transient effect.

April 20, 2011--Life has been busy at DCIN, including with a life-threatening health situation with Atlas. The day after the last update, based on a suspicion because of a non-existent white blood cell count (which was contrary to Pancreatitis), Dr. N (Attie's vet) started to think that Atlas had Panlukopenia--also know as feline Distemper or Feline Parvo. That is a viral infection that is often fatal. An additional clinical symptom that helped Dr. N. to reach the Panluk diagnosis was bloody diarrhea that started on April 12, causing Beth to rush Attie to the vet.

Beth, Atlas's adoptive Mom, has written a Cat on My Sleeve (COMS) blog post with much of the detail about Attie's presentation with symptoms and Dr. N's expertise in diagnosing and treating him. I will upload Beth's COMS post soon. Suffice it to say here that Atlas was very sick and likely might have died. Dr. N. treated Atlas on an outpatient basis to minimize costs, much of which DCIN paid, and Atlas was critical for many days.

This is part of an email I received from Beth this morning:


Atlas continues to improve. We actually had semi-solid BMs last night. Still very stinky and he still missed the box! He saw the vet yesterday and is maintaining his hydration etc. on his own. We're all thinking he is pretty much through this, save for the appetite and BM matters. Dr. N wants to see him Saturday, so no vet visit today. He is changing focus back onto Attie's diabetes regulation recovery, so I am thinking Saturday will be a wrap on this matter. Venita, I know I said thank you this past weekend, but I want to say it again. Thank you. In reading the articles I have posted on FB and in the FDMB daily posts, it is clearly evident any other rescue or person would have not taken their chances against this virus. And I am feeling very much like Dr. N pulled off a miracle, but I know it was basically because he had the knowledge to beat this. I don't think many other animal hospitals in this area would have had that knowledge or would have even taken the risk of contaminating an iso-ward to treat this or trusted a client to work with a highly contagious animal as an out-patient to minimize costs. Atlas was the first cat he has ever treated with this and if we had gone to the 24/7 clinic it would have been their first adult cat, so yeah...I am thinking what Dr. N and Krista [vet tech extraordinaire] did this past week has been pretty incredible.

Beth is working on ways to "decontaminate" her home of the virus. And she had to deal with informing her pet-sitting clients about the possible exposure their cats may have had. That latter issue is one of the topics that Beth deals with in her COMS post, and the one that is the most important to me.

As you can see from the following chip-in widget, DCIN has failed to receive donations even close to its costs for Attie's Distemper treatment. Donations are important. But more important are prayers and well wishes, and all that Atlas received helped him to survive.

April 11, 2012, evening--Atlas went to the vet again today and was diagnosed with Pancreatitis. The vet believes the upper respiratory congestion and nosebleeds may somehow be related. He received SubQ fluids, anti-nausea shot, and a pain shot. The vet sent out blood for an fPLI.

Atlas is not keeping his syringed food down tonight and will return to the vet tomorrow for more fluids and any other necessary meds.

Beth says: Not sure how this is going to end up...

Please help with the chip-in. Beth has paid all she can, and DCIN will be paying the rest of the vet bills.

Bad news....Lots of testing now needs to be done because we have no idea what is causing it...


Atlas has stopped eating and drinking. I syringed him 9cc's of A/D and 6cc's of tuna water at +9. He is still sneezing blood this morning, is very grumpy about being handled at all. I have isolated him in the bedroom from the other cats.

He seems actually worse this morning...

Please help DCIN help Atlas. We paid $290 for yesterday's vet visit, and don't know what the future might hold.


Atlas is at the vet right now undergoing light sedation to obtain some diagnostic X-rays for nosebleeding this morning.

Dr. Nappier is not sure what we will find, but two things would be common.

One would be a nasal tumor and Atlas will need to be seen by a specialist to determine pathology.

The other item may be a dental abscess that has ruptured into the nasal sinus.

I don't know the cost at this time, but if it is dental Dr. Nappier will immediately deal with that.

I would like to request a chip-in if possible to be started. I am guessing about $250-$500 to help defray some of the costs. I will know more later this afternoon.

Here is DCIN's chip-in for Atlas.

Update 11/8/10--A video about the Berea animal Rescue Fund, starring (among others) Atlas the WonderCat (starting at 5:48)!!

Update 9/27/10--Atlas has a purrmanent home, and he doesn't have to move. After receiving an adoption offer, the Berea Animal Rescue Fund decided they could not part with such a charming cat, and he will be adopted by his foster Mum, Blue. The rescue will continue to support Blue's care of Atlas, and DCIN sources are providing him with Lantus insulin.

Congratulations on your new furever home, Atlas. You are one very very special kitty!!! Great job, Blue, on bringing this most handsome cat back to health. 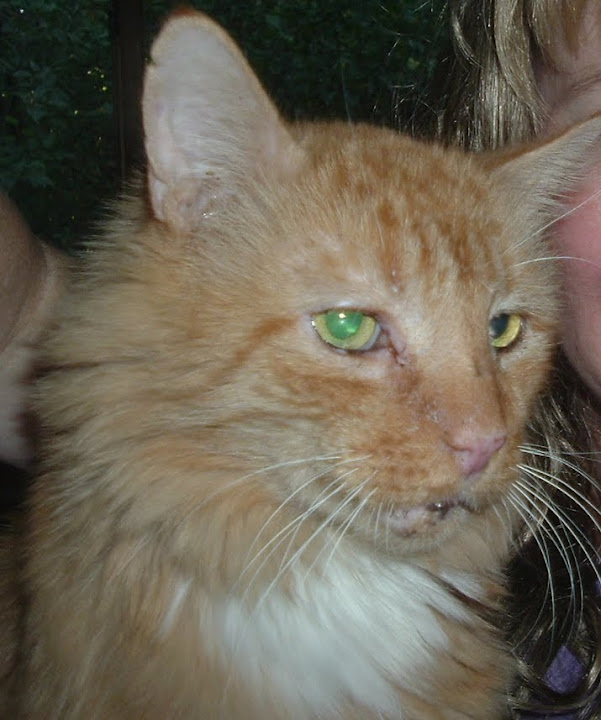 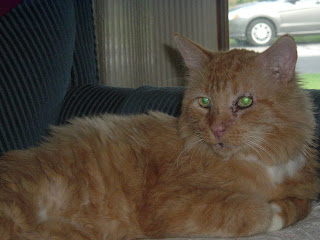 Atlas is a 10 +/- YO domestic, long-haired, orange tabby in foster care with Blue in Berea, Ohio, through the sponsorship of the Berea Animal Rescue Fund. He was found by the animal warden as a stray in January 2010. He is FIV/FeLV negative, is neutered, has claws, and is a big cat. He is currently ~13 pounds, but could easily be happy at 15 pounds.

Atlas is an insulin-dependent diabetic being fed a wet food diet of low-carb Fancy Feast or Purina DM. He was diagnosed diabetic in March 2010, but may have been diabetic longer. He was near death in March, having only a 50/50 chance of survival at that time due to his overall condition, even though he was not actually diagnosed DKA. However, with intensive veterinary care by the rescue’s vet and diligent home care, he came through that crisis.

Atlas was on Humulin N from March through August, 2010, and had several low/hypo events. Home treatment was adequate for those events. Atlas doesn’t have clinical symptoms of low numbers; one must test him to know he is low. Atlas is very accustomed to home testing; he will tell you when it is time to test.

Atlas started on Lantus on September 1, 2010, and his blood glucose level spreadsheet on Lantus is here. (His levels on Humulin N are in an Excel spreadsheet should a potential adopter want to see them.)

In general, Atlas is very easy going. He generally allows poking, pinching, and prodding. He is great with people, including the vet and strangers. He is well bonded with his foster Mom; follows her around like a puppy dog. Atlas likes to sleep at night near or on his bean’s pillows. He gets along with other cats OK, but likes to exert his right to be there. He will hang with people rather than other cats. He has not been around children since coming into foster care. He seems quite content to be an indoor-only cat.

Atlas still has days where he demands lots of food and he uses a perpetual water bowel. He will urinate outside the litter box if he is out of regulation. This could be anywhere outside the box. In 6 months, his foster Mom has had two instances, once on the bed and once near the front door. Both times were not spraying, but actual urinating and he was out of regulation. He does not spray and he does not have “behavior problems.”

Atlas is now in reasonably good health, although he does have chronic loose bowel. He has a bowel movement twice a day, usually a runny, pudding consistency. The foster Mum and rescue have tried various treatments without success. Currently Atlas is receiving Tylosan (Tylan), a combination antibiotic/anti-inflammatory.

Vet records for Atlas and access to his rescue vet, vet tech, and foster Mom are available for potential adopters. Diabetic Cats In Need and his foster Mom will help with transport. 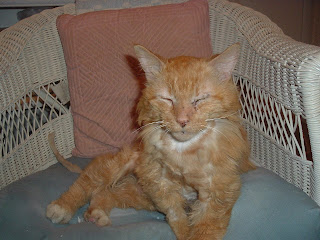 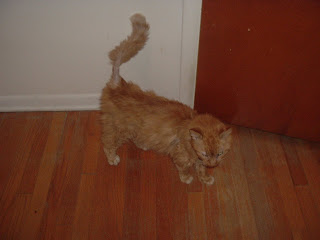 Atlas and I were recently to the vet on 3/23/12 where his doctor had spent several days reviewing Atlas's blood glucose charts.

For the first time ever, I had a vet diagnosis the regulation problem as somogyi effect. We immediately reduced dosage to 2.0 units, that was Friday evening.

As of today he has been below 200 for 24 hours. Somogyi is a highly debated effect and nearly unheard of with Lantus insulin. Our vet wants us to stay at 2.0 units for 3weeks, unless BG numbers indicate something different.