Yoda at Home in Indiana 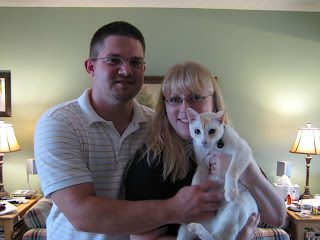 
Well, good news! I got an email yesterday from my craigslist ad I posted at the end of september about Yoda. Of course that immediately prompted a discussion between myself and my husband about giving Yoda up. We have decided that we have become too attached and Yoda has as well. I know rehoming is especially difficult on Siamese kitties because they get sooo attached to their people. I just couldn't stand to do it to him again since we are already his 3rd home in his short life time and he has been here for 6 months already. Plus he gets along so well with my other kitties. Oscar and Daisy don't play with each other, but they each play with Yoda in different ways. So, in the end, I feel Yoda found his furrever home back in June. Now that he is in remission, he only costs us $30 a month in food, which is negligible. When I finish my course work in May and am finally able to work full time, I hope to be able to repay DCIN the kindness that has been shown to us.


We just got Yoda's blood work back today - and he finally has a clean bill of health!!!! No more anemia. He continues to be diet controlled, but will need constant monitoring since he is prone to inflammation and/or infections in his mouth. The inflammation of his gums is currently under control, but he may need 1-2 rounds of clindomyacin each year to keep it at bay. He is a very affectionate kitty. He will talk to you and give a light touch to your arm or leg when he is hungry. If you don't feed him soon enough he tries to eat plastic :lol: He loves laying in the sun and playing with his mousie. He is great with other cats, dogs, and strangers, but make sure they are ok with an outgoing cat! He will sleep at our feet most nights, and likes to climb in my husband's lap while watching TV. He is a great kitty with lots of purrrsonality! 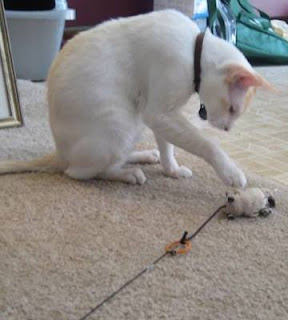 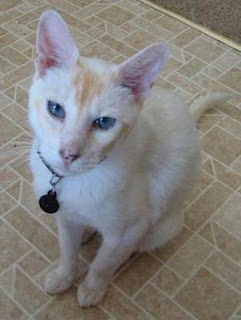 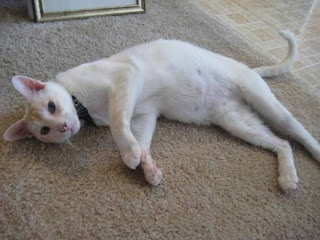 
We ran Yoda's bloodwork again yesterday to see how he is recovering. All I have is a voicemail right now saying that some values are better, but it still shows that he is anemic. I am hoping that means that his kidney values are better. I will have to wait until Monday to call in and see how much the test is to see what kind of anemia he has. The vet said yesterday that he is pretty sure Yoda's swollen lymph node under his jaw is due to his teeth and strongly suggests another dental for him. We need lots of prayers, healing vines, what ever you have to send to us to hope that his anemia is regenerative and easy to treat!!!!!!!

I have asked Kelly to ask the vet two things. First, does the bloodwork indicate that he is stable enough for anesthesia. Second, a detailed estimate for a dental. DCIN will be doing its best to get Yoda that dental procedure. In addition, a DCIN adopter who recently nursed a cat back from the brink with good food and TLC will be talking with Kelly about Yoda's physical condition and what might be appropriate in the way of treatment. And, by the way, the raised bump on Yoda's nose that Kelly was initially concerned about was a scab that has since fallen off. She says his nose now looks like someone took a Sharpie marker to it...all smooth. ****************************************************************************** Update 6/21/10--From Kelly, foster Mom.


Yoda is doing well and has finally settled in to our routine. He sleeps with us for a bit every night and gives me an ear full when ever he thinks he needs to be fed! He is still gaining weight - up to 11lbs 6.5oz today. I can tell it is more than water weight because his hind end seems less boney. I saw him cleaning his fur today and it is much less oily than it was when we first got him. I am getting him to play longer and longer each day. He loves the little mouse on a string. Takes it in his mouth and wants to walk off with it - too cute! Right now he is on an iron supplement BID to see if that will help his anemia, clindomyacin BID for his mouth, and tripe/acidophilus as digestive aids to help him process the food he is eating and to counteract the runny poos from the antibiotic. His ketones are slowly going down, and we are still giving 50ml of fluids every other day - sometimes every third day depending on how he is doing. His right lymph node under his jaw is still swollen and his back teeth gums are still red and inflamed. The front ones look a little less angry though. And now for the pics. They speak for themselves in regard to how far he has come in only a week and a half. You can see our intro thread for pics of what he looked like the night I picked him up.


Yoda is my new flame point siamese foster kitty as of last week. He came to me severely dehydrated, malnourished, in the beginning stages of DKA, and very lethargic overall. Since then he has gained a pound and a half just in a diet change alone and is sitting around 10lbs 8oz right now. We took him into the vet yesterday to get a blood workup and exam since the previous owners only did a glucose test at the vet. Obviously his glucose was high - but they also found a few other things. Despite having a dental back in September of last year, his gums are inflamed again and they are thinking possible stomatitis. He is anemic (RBC, HGB, and HCT levels are all low). His MCHC is on the very high side of normal (this can mean a b-12 deficiency in humans sometimes from my reading). His BUN and Creatinine are on the high side of normal, but the ratio is smack dab in the middle. CPK level is on the very low side of normal. His sodium/potassium ratio is low, but the sodium levels and potassium levels are fine. And the magnesium levels are on the low side of normal. I have attached a scan of his CBC results (there are 2 pages). The shaded areas to show the normal range didn't scan very well, so you will have to go by the range values. [The report pages are here and here.] The vet has put him on an iron supplement for the anemia and clindomyacin for the mouth. They want us to come back in a month for a re-check. 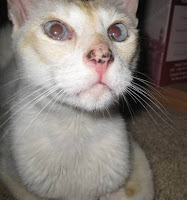 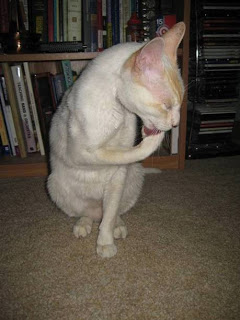 Initial Post 6/11/10--Marvie posted an email about Yoda on the FDMB on Sunday, June 6, even though DCIN is not presently intaking new diabetics. The message read:


Sweet 4-5 year old flamepoint siamese cat (in Louisville) has been diagnosed with diabetes. The owners are unwilling/unable to pay for its treatment and plan to have him euthanized SOON. Please contact [name and email address deleted] if interested in adopting, fostering or sponsoring his (modest) medical bills. Thank you!!

Within three hours, Kelly offered to foster the cat, saying:


We can't take him on permanently due to financial issues, but we can foster him until a purrrrmanent home can be found. We are only 2 hours away, and I would rather take on another kitty than to hear about another euthanasia due to diabetes. Please let me know, and I can drive out there this week and pick him up.

After phone calls with the vet and the owners (learning that he sounds like a sweety--very young, socialized with cats, dogs, and kids) and a negative FIV/FeLV test, Kelly picked Yoda up on Wednesday. Kelly will be providing more information as she gets it, but we know that Yoda is UTD with rabies (but nothing else), recently had a dental and was treated for ear mites, and tested over 500 mg/dl at the vet (no fructosamine test). He has the common diabetic clinical symptoms--PU/PD, weight loss, and bad looking fur. He has quite a bit of black spots on his nose - 1 of which is raised. His vet records indicate he has has steroid shots 4 times, meaning he is a steroid-induced diabetic and could go off insulin if his general health improves and his diabetes is properly managed. He is 9 pounds, down from 10.6 pounds in the past year. At present, Kelly's job is to get this boy in better shape health-wise. She believes he has been diabetic more than a month, given his general poor condition. He is eating wet food well at Kelly's house, and drinking up a storm. Kelly is putting Yoda on ProZinc until she receives Levemir, which is being donated through DCIN. A blood test showed ketones the first night, but they were lower by the next morning and Yoda was acting like he was feeling better.

He is such a cutie! I would love it if I could take him. If he hasn't found a furever home after I'm moved into my perm home I'll tell the hubby 3 cats make a home :)