At midnight tonight (one hour from this post) it will be two weeks exactly since Bumperic's last shot! He is so happy (and so are Shaun and I!). He's put on weight and his fur is soft and shiny, and it's all grown in on his back where he had lost fur. But he's starting to lose fur on his tail again so I've got to get him another flea treatment. Yesterday I picked him up and then I wasn't so sure who I was holding! (I have two black cats) So he's come a long way if I'm mistaking him for Doogie!

Bumperic says thank you to everyone who has helped him! He wants to say a special thank you to Cindy and Mousie, Suzanne and Nemo, Marialyce, Mary and Stormy Blue, and Venita and the Boyz. And also to the FDMB angel who ordered Simon's CD for his mom. And also a huge thank you to everyone who donated to the FDMB cats in need fund, and especially to Kim and her sister for saving his life from the streets this Christmas season. There are other people who need to be thanked too, those who have offered to help but I haven't answered all my PM's or emails (sorry!!! I'm trying!!!) Bumper knows the word "food." He was sleeping last night in the kitty condo and this morning I asked him if he wanted "food." He immediately came out, which usually he won't do, and gladly offered his ear for testing. He purred and purred and put up with me trying to get blood. He had about four or five meals today and is very happy. 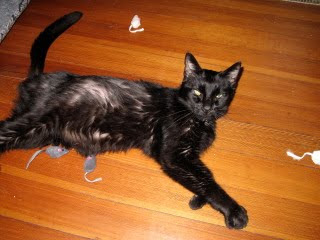 Update 12-06-09--Heather has adopted Raisin, now named Bumper. This is what she wrote after she got him home.

He just downed a whole can of food and is now on his second helping. I tried to test him but couldn't get enough blood. He really wanted to eat so I gave up testing for the moment. Raisin is a really mellow cat. He only cried a little bit on the way up from RI and at one point he stuck his head out of the sherpa bag when I had to go into Walmart for the testing supplies, but he was very well behaved. Thank you everyone for all your help, and especially you and your family Kim, for rescuing this loveable guy! I hope you don't mind if I change his name though. Anyone want to help name him? He's a very handsome black kitty.

Fundraising update: Although Bumper was a short-distance adoption and no moneys were needed for that, fundraising is ongoing for Bumper's day-to-day diabetic needs--insulin and test strips. ***************************************************************************** 12-04-09--Kim took in a stray cat that her sister was feeding on her porch. She took him in because it was pretty cold Saturday night, he was very friendly but also skinny, and had hair loss due to a (now corrected) flea problem. (Kim's sister had taken the cat, now named Raisin, to the vet the week prior and got him all his shots, Revolution, de-wormer, and he's already fixed.) Turns out, Raisin is diabetic-Kim noticed how much water he was drinking the first 12 hrs she had him in her finished basement. She's going through with getting him regulated, but can't keep him. Kim has a big male cat (Dakota) who's very aggressive towards cats he doesn't know. Long story short--it's serious aggression and stress affects Dakota's health and the safety of her other cat, Lola. Kim won't take Raisin to a shelter--they'd put him down. The few no-kill shelters there are in Rhode Island are full. Kim needs to find Raisin a home.

Kim is located in Rhode Island, but would travel up to 12 hours to deliver this little guy to a new loving home. She believes someone turned him out because they didn't want to deal with his issues--when Kim's sister found Raisin, he had a collar on. Calls to the shelter didn't turn up any lost pet claims. People let this cat down and she can't do that to him. Kim is treating Raisin's diabetes, but really needs to find him a home within the next 2-3 weeks. Most of the initial expense will have been paid already. Kim is looking for someone who will adopt Raisin, or direct her to a group who can foster him while a new home can be found. Kim says: "He was just so sad, all huddled up against the cold wind on my sisters porch that i HAD to do something.... All his vet records are at the Warwick Animal hospital, and can be faxed to whomever adopts him. I could also pay for the next vet visits to get him regulated. I'm really at a loss. I'm willing to help this cat who's had some rough times, but I have to think of the health of the other two I already have as well. Thanks so much for any insight, suggestions or anything that can help this kitty get a new home!"