April 29, 2013--Julius flew home yesterday, departure and arrival right on time. Before he left, he had a little to say about his empty food dish.

Thank you all for helping to get Julius home and for all the well wishes for his rescue, rehabilitation, and transport.  Live long and prosper, Julius!

April 2, 2013--A cat named Cyclops came as a stray to King George Animal Control (Virginia) shortly after the first of the year. He was named Cyclops because he was missing his right eye. Cy wasn't eating at the shelter so he went to the vet, who discovered he was diabetic and then overdosed him into a serious symptomatic hypoglycemic episode. The vet tried for a couple of days to pull Cy out of the hypo, and finally Fancy Cats Rescue Team (FCRT), a diabetic-friendly rescue in Northern VA, stepped in and rescued him. Before the hypo event, DCIN had been able to find an adoptive home in Colorado, and thankfully his adoptive Mom has stuck with him through all that has ensued. 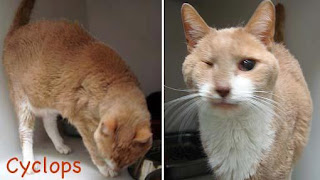 During the couple very scary days when FCRT and DCIN were not getting much information about Cy and didn't know whether he would survive, further research found that he had not been a stray and that his previous name was Lincoln. But that name hasn't stuck either as his adoptive Mom has renamed him Julius. 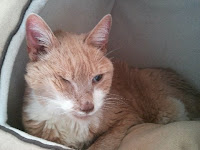 Since mid-January, Julius has been in foster care with Ronda of FCRT. That is much longer than we had hoped for, but because Julius came to his foster home in very bad shape from the vet (dehydrated, inappetant, URI, underweight, very bad mouth), he has needed rehabilitation. We also discovered that besides missing an eye, he also is missing part of his tail.

Here's a short Facebook video of Julius in his loving foster home.

Julius still isn't regulated on insulin, but he is much more stable than he has been (he was quite the bouncer). DCIN is now planning to fly him from VA to his new home in CO at the end of April.

For that purpose, we are asking for your help. DCIN needs to raise the funds to ship Julius home. The cost of a flight, the carrier, and the health certificate for the flight is ~$500.

Venita, the link to the donate button is broken. May I send a pyapl donation or call it in for Julius? Is he healthy enough to fly? Please let me know and I will donate $50, thanks, Didi

Hi Didi. All the YouCaring links were nonfunctional this morning. They seem to be working now. You can donate by PayPal to donate@dcin.info. Please use the "give to friends/family" button and leave a message that it is for Julius. Yes, J is quite healthy enough to fly now. :)