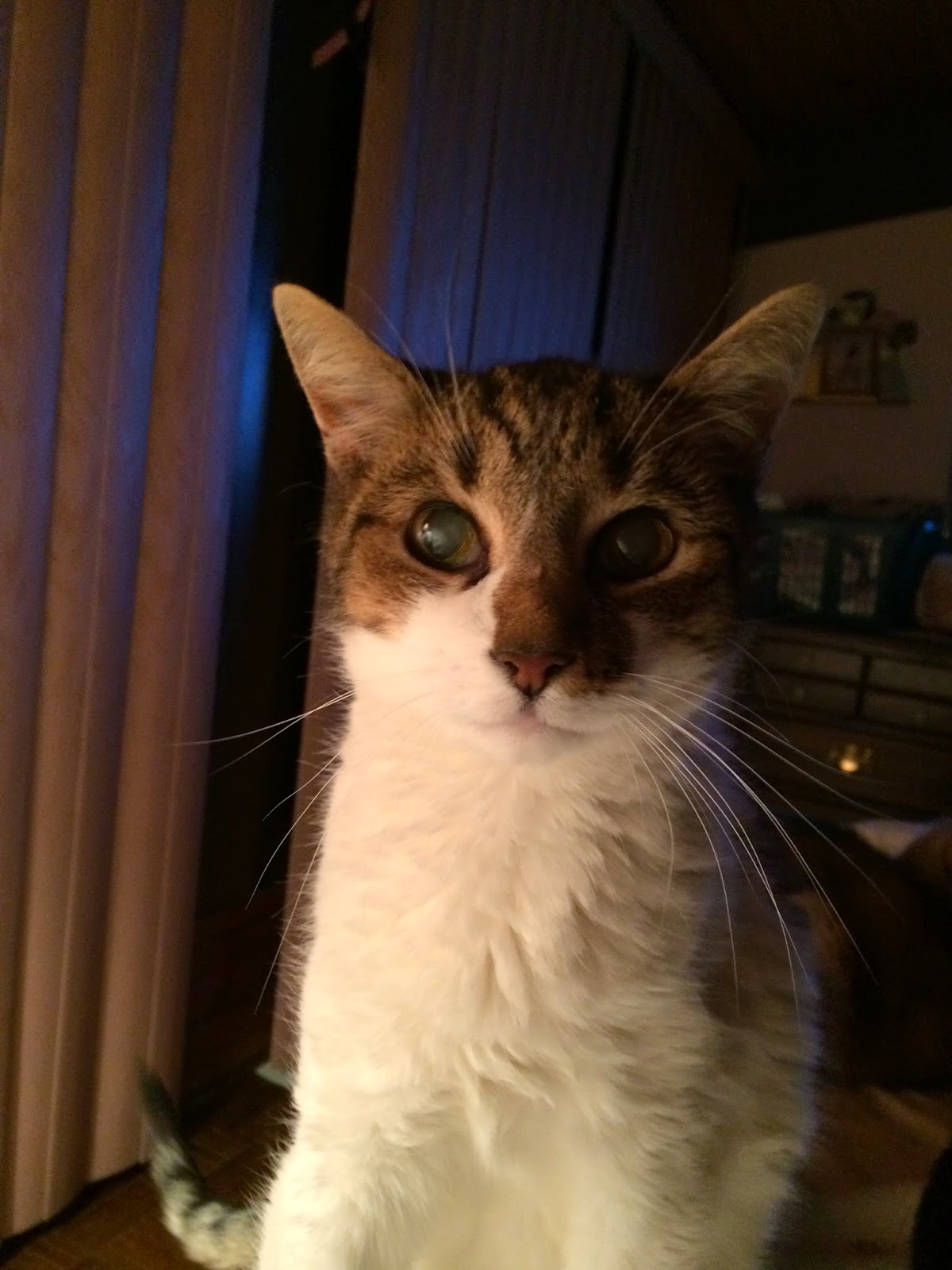 January 31, 2014--Louie is a blessed cat that certainly landed softly. He's what his Mom recently wrote about him.

"I have to tell you about the strides my boy has made. As you may know, Louie has had his own room since he arrived. Even though the door remained open, he would go back in for comfort and many times to sleep. Some of the other cats would go in with him so he wasn't alone.

We also had a litter box in there because he wasn't comfortable going into the basement where we keep 12 litter boxes!!!!

We fed him separately in his room since he was a little disruptive at meal time. He knew to go into his room when we called his name. 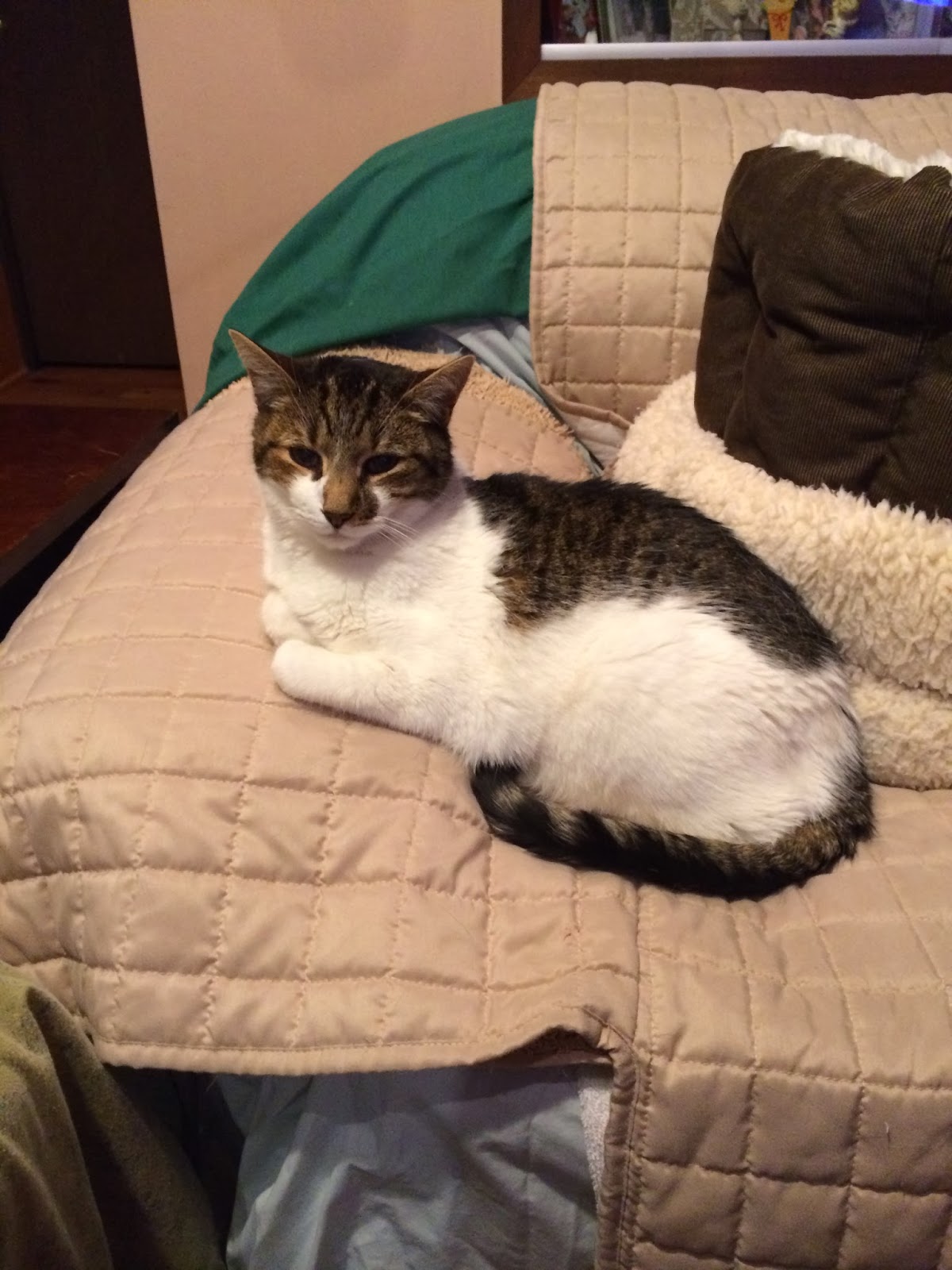 My husband decided to remove the litter box a few weeks ago and no accidents!!!!! He goes to the basement with everyone else.

I decided he needed to eat with everyone else so for the past week, my boy has been happily eating with the rest of the cats. He is vocal and can be a little impatient but is learning to wait as I talk to them while preparing meals.

He used to rarely venture upstairs to the second floor. Now he comes up and sleeps on a cat bed in the area outside of the office.

Also, the best part....he lays on the couch near me sometimes at night!

It took a little over a year for the total transformation but we never gave up and we never pushed him to do more than he wanted or felt comfortable doing.

Thanks for allowing us the honor of being Louie's people!!!!!" 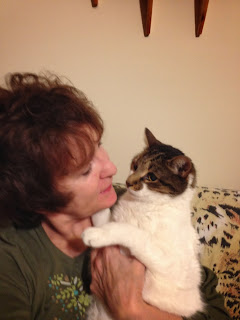 November 10, 2013--Today is Louie's one year Gotcha Day! He's not a big snuggler but he is a sweetheart and I'm glad he came into our lives! He is now down to only 1 unit of Lantus twice a day!!!!! He has come a long way in only a year." 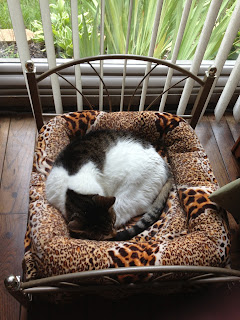 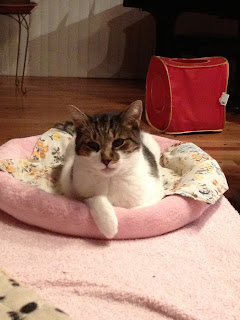 Louie says "I still love being with my Mommy and the cats most of the time. Once in a while I have to chase a cat named Fancy for some unknown reason!!" He sure loves his pink bed!

January 13, 2013--Louie sure loves his treats! Look how he wraps his paws around his Mom, he's so excited!

However, we now have to address his terrible dental problem.  We couldn't even think about that until he was regulated.  He may end up with no teeth.  That bothers me becuz he loves his treats but I know my Louie will find a way to eat them.  One day I will have to have my husband take a pic of him getting them from me.  It's adorable!!!!!  He wraps his arms around my arm!

Louie is here to stay!!!!!! Thanks to DCIN for bringing this sweet baby into our lives."

November 27, 2012--Louie went to the vet today. The blurriness in his eyes seems to be improving with getting regular insulin shots and he gained 1/4 pound!!!

November 23, 2012--Pictures of Louie with his new kitty friends.

November 18, 2012--Louie is living large! He has totally gotten used to two regular meals a day and has gained a few ounces already! No longer a bony boy. When we got him, his eyes were cloudy. After a week of regular insulin doses, they have cleared!!!! Not totally but I believe at least 50%. I think my vet will be amazed when she sees him again in about a week. He's such a sweetheart and lovey. His former owner was right about that!!!! I'm overwhelmed that I have made a difference in his life in such a short time." 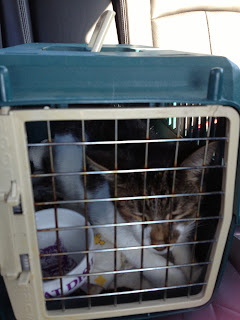 November 11, 2012--Louie's new Mom picked him up and he is on his way home! After being offered some water he decided it was time for a nap. He got up extra early this morning to prepare for his journey home. After 7 hours after arriving at his new home, Louie is no longer hiding! He has chosen to wander around his room and examine all his toys, beds and scratching posts. His new mom wrote "We have fallen in love." ~JennF

October 16, 2012--Update from Louie's "Aunt". He has been staying outside and is not getting tested regularly and usually gets just one dose of insulin a day, if that. He continues to lose weight. She is planning to have him seen by a vet and have blood work done. With the cold weather coming Louie really needs to find a safe, warm home were he can get the proper treatment for his diabetes.

June 1, 2012--Louie is being taken care of by his "Aunt". He was diagnosed with diabetes a few years ago. He was no longer able to live with his dad, so his dad's family took him in. First he was being treated by his "Grandpa" but wasn't getting tested. His "Aunt" finally took over his care and began testing him. He is on Lantus .75u BID. Right now his living situation is not ideal. There are some other cats in the home and they are all having to live in the den with access to outside. It seems that Louie is again un-regulated. He has began to lose weight and his Aunt fears he will just start to decline. "He is a very sweet cat who deserves a better situation than he is in. He loves attention and barely gets any here." Contact JennF@dcin.info for more information on adopting this sweet boy. 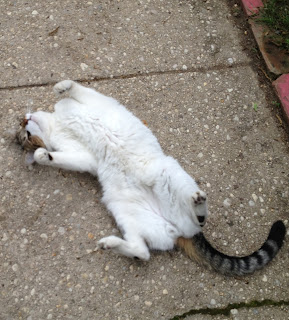 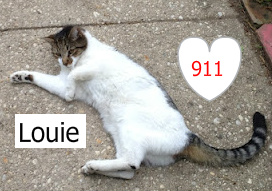 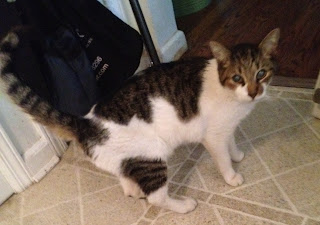 Posted by Jennifer F Alvarez at 10:46 AM