Brady is Home in Virginia 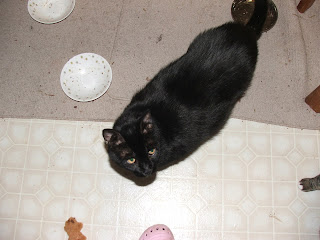 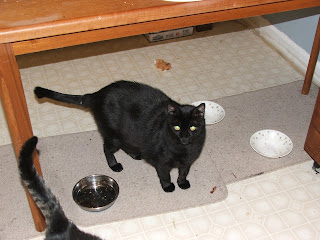 Brady is doing SO well! I am very proud of him =) His BG numbers are staying well within normal range and he seems happy to eat the all canned food diet (though we have to be very careful about picking up the dog's kibble if they don't eat it right away because the cats will!) He is down to 18 pounds 14 oz now! He plays with our "kitten" Echo all the time, they are great friends =) He cuddles with Bella and BB on the couch or chair where we keep electric blankets on low for them and he snuggles up against me when I sleep. He's a big time cuddle bug and I love it! He seems to have little to no trouble jumping up on the couch and even my king sized bed, which is allllllmost too tall for my short self to get in and out of without a stool ;) We do have steps there for the kitties but most of them bypass the steps and jump. 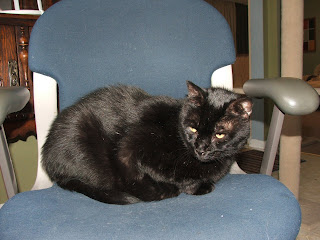 His fur has grown back in almost all of the bald spots though his ears are still patchy, not sure those will ever fill in. Poor guy had literally scratched himself bald and scabby when his ears were infected and dirty before we got him home. Now though, his fur shines brightly and the dry skin is mostly gone and he is just plain silky to the touch =) 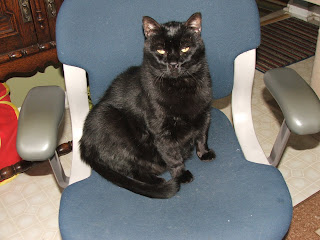 He is still (and always will be) sensitive about being touched on his rear half due to all the buckshot under his skin but he isn't ugly about it, he will give you a dirty look and might give a little nibble to remind you that you are Not Allowed To Do That. If you leave his back half alone though and focus on his head and shoulders he will purr like a race car and will drool like a Mastiff. He is purrfectly suited to our household and we are all so very happy that he came to live with us. Thank you DCIN and everyone who helped get him to us and helped us get him healthy! He sends purrs and drool to you all for your help =)

Update 6/20/10--Welcome home Brady!! Brady traveled the last two days to finally make it home to Marvie. He flew Continental Cargo from New Orleans to Philly. Leslie and I picked him up. (Thank you Leslie!!) What a big black boy. Somewhat like a fuzzy bowling ball. He is the most incredible love bug. He was purring as he came out of his carrier at the Cargo terminal. He purred whenever Leslie, Jim, or I handled him as he stayed at Spa Venita Friday night. He did not require insulin as his blood glucose number was 109 mg/dl at +24.he also did not need insulin on Saturday morning at +36 because of a BG level of 74 mg/dl.(Quite surprising because he had been receiving 9 units of Vetsulin daily, split between 2 shots.) Brady was ground transported in 5 legs down the DelMarVa peninsula, using most of the drivers who had helped with Bean's transport. Thank you DC, Michelle, Jim, and Marvie for your driving. This has portions of Marvie's reports on Brady's overall condition.

Brady-boy has very thin fur and his poor ears are all messed up from the mites and scratching, dandruff and lots of shedding going on now. I hope a proper diet will help with that. I've got Tresaderm for his ears. I do see that his walk is a bit... tender? Not sure how to describe it, not really a limp but he's very careful. Doesn't stop him though =) Hopefully weight loss will help that but if we need to get him some pain meds for it (probably by winter if not now, I would think the cold would make him ache more) I tried to get him some ab's for his URI, he sneezed a big green glob of snot on Michelle's car, but the vet's office wouldn't even consider it without seeing him and they closed before we got back here with him. So we'll give him Lysine through the weekend and Monday morning I will be on the phone getting him seen. He's a very laid back boy. He let me wipe out his ears with qtips and cotton balls *shudder* they were pretty gross but he purred his way through the cleaning and kicked his back leg too :lol: He cooperated with the ear drops as well. I got a BG test in at the same time... Broken Brady tested 66 at +46 I don't foresee a need for insulin unless the Tresaderm or his broken tooth causes a rise before we get those issues resolved. Broken Brady doesn't seem to be suffering with his URI. I think he's had it for so long he's just used to it, poor guy He's active, alert, quite demanding for skritches and attention. I do think his tooth is causing him pain though. He goes to his bowl and eats with great enthusiasm for a few bites, then he quits. Even freeze dried chicken seemed difficult for him to eat... he managed, but he really had to work on the tiny pieces that I gave him. 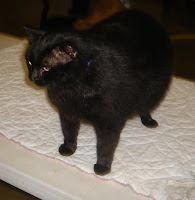 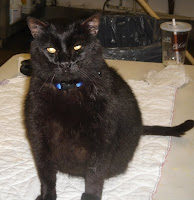 I went to see Brady today. He is extremely overweight. He is huge! He has some issues with scratching around his ears, maybe ear mites are causing him to scratch?? And some raw areas around his rear. They told me he receives an insulin shot in the am and one in the evening. Has had no issues with excessive drinking or urinating since he has been on the meds. They also feed him special food but I would venture to say he makes the rounds and eats what ever is out for the other cats. He did sneeze some when I was there and has a gooey discharge from his nose when he does. Eyes looked clear. He is a very gentle, sweet boy and I would have taken him out of the shelter if I had room here. Gets along well with all the other cats. Is let out in the area to walk around, etc. during the day. Although he does not move around a lot. Does not seem to have dehydration problem from lifting on his neck. In my opinion no cat belongs in a shelter environment. Don't even need to say that. He is very laid back but he needs to get in to more of a home environment where he can be well groomed, etc and loose some weight. These folks have their hands full and do a fantastic job with little resources and staff. Like I said, I would have pulled him but he should really be alone in a home for awhile.

Initial post, 3/25/10--Brady is a very big boy with diabetes that has been living in the no-kill Denham Springs Louisiana Animal Shelter for three years. He's a good boy and it's time for him to live in a real home. His PetFinder page is here. Brady is a black domestic short hair, large boned, neutered male, weighing 24 pounds. (Although Brady is currently overweight, I was told that his weight is down from ~35 pounds in December 2009.) He was a Tom that came to the shelter in late winter 2007, and diagnosed diabetic by a vet in the fall of that year. Brady is on 4 to 5 units of vetsulin and is not hometested. He eats 1/2 cup dry DM morning and evening, and wet DM when it is donated to the shelter. I do not know what his blood glucose levels have been like, but will work with the shelter to get his vet records. He has no history of hypoglycemia, and the shelter personnel says his DKA history is unknown. His only diabetic symptoms are PU/PD. Brady sleeps and eats in a cage, but is free roaming in the shelter's "Special Needs" area from 7 am to 4 pm seven days a week. A laid back guy, Brady does well with other cats. Whether he is OK around dogs or children is unknown. Brady has chronic upper respiratory infection/inflamation, which is not unusual for a shelter cat. The shelter personnel say the Brady has no behavior problems (such as spraying or inappropriate urination).He is FIV/FeLV negative, but I do not know when that test was done. The shelter personnel provided no information about the status of his vaccinations.

I would like to find someone to visit Brady at the shelter. The closest large town is Baton Rouge, LA. Please let me know whether you can visit him and report on his condition.
Posted by Venita at 5:36 AM

I operate Don't Be Cruel Sanctuary in Albany, not far from Denham. I responded to a call for help in visiting the shelter and will do what ever you tell me is needed to check him out! tnrowell@charter.net

Something about Brady is tweaking my acro-senses.

It would be interesting to find out more about his blood sugar control and if he is high dose.