Chubby Has a Home 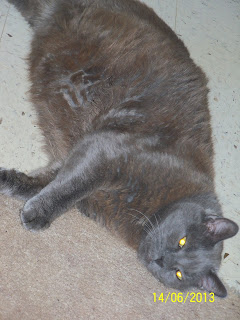 October 18, 2013-Update from Chubby's new mom; "He's broke! Still being called Chubby, and for a reason, 16#+. Not real active. Loves being carried around and will lick your face and neck. Sleeps with me every night or else tries to huff and puff and blow the door down. Gave him 3 shots of .5u when he first came BG this morning was 72." It's hard to believe he was on 7u twice a day of Humulin N insulin with his former owner.

September 8, 2013--Chubby has arrived at his temporary foster home. He is full of fleas and has started on Lantus insulin. His first BG readings were very low but then got up into the 200's. He will move to his permanent home soon but for now he is feeling the love with his foster mom.

Please Click This Link to Donate to Get Chubby Home


Thank you very much!!

September 4, 2013--DCIN has found Chubby an adoptive home in the Southern US. DCIN has had him vetted and is awaiting the lab reports, but we do know he is FIV/FeLV negative and weighs only 17 lbs. A glucometer test shows a high BG level, but we cannot be sure how much of that might be liver rebound after years of being on a high level of an inappropriate insulin. But Chubby's adopter is very experienced with feline diabetes and will be able to get that all figured out. Chubby will start on Lantus insulin and hometesting as soon as we get him into a temporary foster home, which will be within a few days. ~Venita


July 19, 2013--Diabetic Cats in Need was contacted regarding a diabetic cat in NH that needs rehoming. His owner was in an accident and is now wheelchair bound and is not able to physically care for a diabetic cat. A neighbor comes and gives insulin when she can, usually just once per day, but she will not be able to do so for much longer. 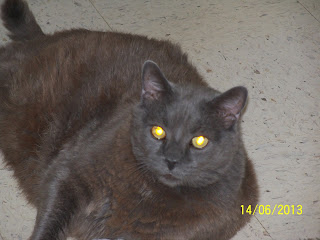 Chubby is getting 7U of Humulin R. (We later found out it was Humulin N.) He is eating both wet and dry food, owner is not sure of what brand. He is a 25 pound cat, all grey, indoor/outdoor and has not been to a vet. He's been treated for diabetes for 4 years, owner has had him for 5 years. He has not been to a vet in years and we're not sure how he was diagnosed with diabetes or if he is in fact diabetic. We would really like to get this cat to a vet and FIV/FeLV tested plus regular bloodwork and see exactly what's going on. Who knows what 7U of Humulin R is doing to this kitty plus the weight issue.

Please contact JennF@dcin.info.
Posted by Jennifer F Alvarez at 8:15 AM